Lists are something you use every frequently in documents, and there are good reasons to create styles for this purpose. First, using a style gives you full control very easily. You can set the amount of indentation, the line spacing, the numbering or characters used, etc. Second, by creating a style for this you have consistency compared to using the buttons on the Formatting toolbar. And finally, by using styles you can make changes later much more easily than if you manually  formatted your lists.

The first thing to understand about List Styles is that they are really just a particular case of paragraph styles. That makes them easy to work with in some respects because the concepts you already know in respect to Paragraph Styles will carry over to working with List Styles. The same dialog boxes are used with much of the same settings. The second thing to understand is the concept of Nested Lists. These are lists where there is a hierarchy of levels.

One other thing we need to mention here is that LibreOffice, for reasons not known, uses two different terms. In some places they are called List Styles, and in other places they are called Numbering Styles or just Numbering. This can get confusing, but I will call them List Styles consistently. These lists can be either Numbered or Bulleted as the case may be, but you will want to use styles to achieve control over them. As an example, last year I did a session at Ohio LinuxFest  where one of the participants asked a question about how his lists were presented on the page. He had been looking for a long time for an answer without success, but it turned out the answer was in the style. So I think this is a good tool to master. We all use lists in our documents, and using them correctly will be big aid to productivity.

As I have mentioned, I always have my Styles and Formatting window open and anchored to the left-hand side of the screen in Writer. So all I need to do is click on the last of the style tabs on the top to bring up this window: 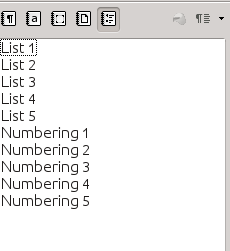 This is the List Styles display in the Styles and Formatting window.

This is what you get out of the box, and it is fairly basic. Each of these styles is slightly different, though the difference is sometimes subtle. But looking at what they do is instructive in understanding the capabilities of styles. The first 5 styles are List 1 through List 5, and these are all styles for Bullet lists. The readily observable difference is in the graphic used for the bullets.

The 5 built-in Bullet styles are displayed

The other 5 styles are for Numbered lists,  obviously, and the differences are somewhat subtle:

If you consider the just the differences you can see you will notice that there are a number of options here. Graphics, spacing, number types, and periods are all options. And there is even more. But to get into this we need to look at the Styles dialog box. Like we have seen with other styles, you right-click on a style, and a selection window pops up that gives the choices of New… or Modify… Let’s take a look at the settings for List 1 by selecting Modify… 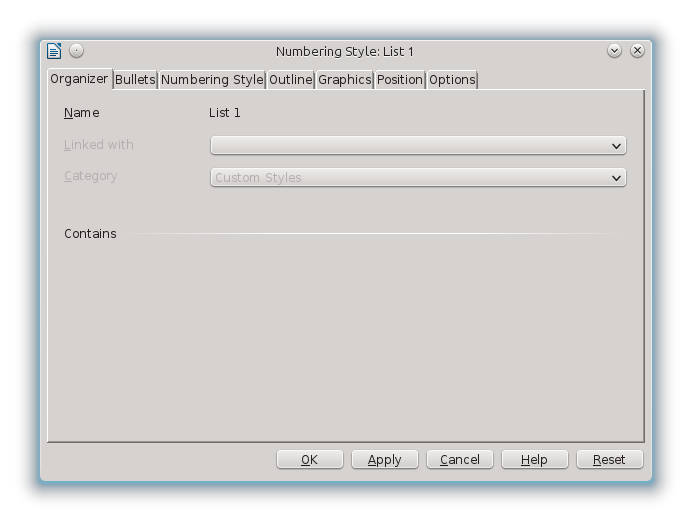 The first thing we can notice is that while this is a Bullet list, the window says Numbering Style. As I said, LibreOffice is inconsistent on this point. Now the first tab  is Organizer and we see that everything is greyed out. If you were creating a new style these would be available, but they are not for the built-in styles. The following tab is called Bullets, and this lets you chose among available bullets, among other things. The third tab is for Numbering, and let’s you choose among Arabic  numerals, Roman numerals, letters, etc. The fourth tab is called Outline, and lets you do some advanced controlling of nested lists. The fifth tab, Graphics, is also for use with Bullets. It lets you insert colored graphics for use in your bullet lists. The sixth tab, Position, is where you place precisely each object within a list. Did you notice the differences in the numbered lists between Numbering 1, Numbering 3, and Numbering 5? They are due to positioning, and this is where you control that. BTW, my inquisitor at Ohio LinuxFest found the solution to his problem here. The last tab, Options, lets you modify the working of your Outline nested lists. And it also gives you the capability of using your own graphics as images for your bullets.

So, we have a lot of things going here, and it will take several lessons to work them. We will begin by looking at Bullet lists in the next lesson.

Listen to the audio version of this post on Hacker Public Radio!